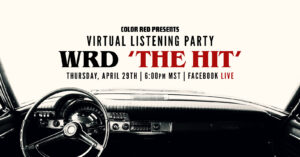 Join Robert Walter, Eddie Roberts, and Adam Deitch as they host a virtual listening party for the debut WRD record ‘The Hit’ out April 30th. The band will discuss their collaborative history, their sessions at Color Red Studios, and offer track-by-track commentary as we listen through the record in full. The virtual event also doubles as a triple Taurus birthday bash for all three members of the trio!

WRD, the dynamic, gritty organ trio borne from the brain of Denver-based guitarist-bandleader-producer and Color Red record label co-founder, Eddie Roberts, boasts the bullish energy of three seasoned bandleaders in one standout sonic boom. The group, which features the nimble guitarist Roberts, the staccato drummer Adam Deitch and the elegiac organist Robert Walter, brims with talent and prior successes between them. Perhaps that’s why the trio, as if charging at a target, was able to produce its forthcoming debut LP, The Hit, in just two single-day Mile High City studio sessions. It’s a common rule that any good organ trio must have its own musical language, a unique sense of ESP. Luckily for WRD, the members’ creative intuition resembles three noble creatures sprinting in unison – head down, horns out. Roberts, who co-founded Color Red in early 2018, has always believed that the musical combination of Walter (The Greyboy Allstars), Deitch (Lettuce) and himself would yield impact. Roberts, the longtime guitarist for the band, The New Mastersounds, would often bump into the other two at the New Orleans Jazz Fest. On these occasions, they would longingly discuss future collaborations. But upon co-founding his Colorado-based label, Roberts knew it was the perfect time to get the fellows in the studio to cut some tracks. The result is a record that’s one-part Sunday stroll and one-part rocket ship toward Saturn. But in a way all of this was already written in the stars ahead of time. Roberts, Walter and Deitch, who all share birthdays within a week of one another, are each an astrological Taurus. As a such, the amalgamation of their work together is blunt, determined and muscular. Together, their songs strike cleanly and without distraction. WRD Trio is: Robert Walter – Organ & Keyboards Eddie Roberts – Guitar Adam Deitch – Drums