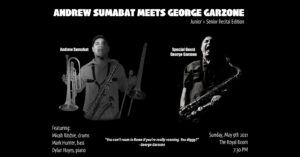 We invite you to watch Andrew Sumabat’s Senior Recital featuring George Garzone live streamed at the Royal Room in Seattle!

Andrew will be playing trombone and tenor saxophone, and will be joined by renowned saxophonist George Garzone, Mark Hunter on bass, Micah Ritchie on drums, and Dylan Hayes on piano.

The recital will feature two sets of music, the first set consisting of popular Jazz standards, and the second set consisting of original music written by Andrew and Mr. Garzone. We hope you will join us for an awesome night of music!

Andrew Sumabat is a 22-year-old Filipino-American musician, multi-instrumentalist, and content creator from Seattle, Washington. His main instrument of choice is the trombone, but he also plays the trumpet and saxophone. Andrew became enamored with music at the age of 10, when he first delved into the world of music by picking up the clarinet in 5th grade band class. Upon being introduced to Jazz in 2011, Andrew was inspired to study Jazz and other music from the Black-American tradition. He has participated in Essentially Ellington Jazz Festival and Competition in 2017, toured internationally with Carnegie Hall’s NYO Jazz backing vocalist Dianne Reeves and trumpeter Sean Jones in 2018. In 2021, Andrew was selected to become a member of the JAS academy Big Band directed by Christian McBride. Andrew has performed and worked with such people as Wycliffe Gordon, Sean Jones, Ted Poor and Jiggs Whigham amongst others. Currently pursuing his bachelor’s degree in Jazz Studies/Music Performance at the University of Washington in Seattle, Andrew’s present musical endeavors include studying privately with trumpeter Cuong Vu, drummer Ted Poor, pianist Marc Seales, and saxophonist George Garzone.

George Garzone is a world renowned Jazz Saxophonist and Composer. Mr. Garzone performed with many of the world’s most prominent Jazz musicians such as Joe Lovano, Jack DeJohnette, John Patitucci, Chick Corea, and Christian McBride among others. Mr. Garzone is well-known as a sought-after jazz educator, currently teaching at the Berklee College of Music since the 1970’s. He has also previously taught at New England Conservatory, Longy School of Music, New York University, Manhattan School of Music, Northeastern University and the New School University. He has pioneered the Triadic Chromatic Approach, an improvisation concept which has his own signature in the jazz improvisation vocabulary. In his never ending teaching career, great musicians of the actual scene have been students of George Garzone, like Joshua Redman, Brandford Marsalis, Seamus Blake, Chris Cheek, Mark Turner, Donny McCaslin, Danilo Perez and the Grammy-Winning Drummer Antonio Sanchez, to name a few.