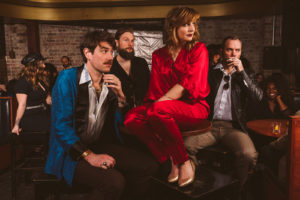 Fronted by husband and wife duo Kim West (keys and vocals) and Ryan Devlin (guitar and vocals,) Smokey Brights is a rock band out of Seattle, Washington. The couple’s entrancing bond shines through in their deeply personal cowriting as well as their ecstatic live performances. West, a barred attorney, and Devlin, who has a background in booking, publishing and punk bands, met working summers at a pizza restaurant in college. They write about their transition from young friends to life partners in their beloved city, touring in a van during the Northwest’s notoriously grey winters, and being in love in a deeply uncertain world. West and Devlin’s songs are made eminently danceable by Nick Krivchenia (drums) and Luke Logan (bass.) Krivchenia, an Ohio native from a family of musicians, brings a soulful, classic groove to Smokeys’ sound. Logan, who grew up singing folk songs with his family in Kodiak, Alaska, provides melodic bass lines and a crucial third harmony to the band’s vocals. Known for their explosive live shows that immerse the listener in warm, harmony-rich, arena rock anthems, Smokey Brights instantly found a hardcore fanbase in the US, UK, and Europe, and have earned slots at SXSW, Bumbershoot, Sasquatch!, Off Beat Festival, and Treefort Music Fest.

The band released its third full-length LP, I Love You But Damn, on Freakout Records in Summer of 2020. The album has garnered instant critical success, landing them reviews in Rolling Stone France and Germany, American Songwriter, and a top 100 chart position on the NACC charts. 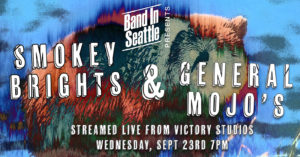