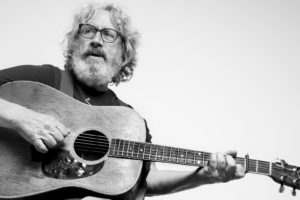 Jim Page has recorded 22 albums and toured in 14 countries. His songs have been covered by Christy Moore, Dick Gaughan, Roy Bailey, The Doobie Brothers, The Moving Hearts, Michael Hedges, Leftover Salmon, and many others. Jim Page was born in California in 1949 and grew up in the heyday of the San Francisco Bay Area in the 1960’s. The political and social awareness of those times was a part of all artistic expression and it has stayed that way in Jim’s music ever since.

Jim arrived in Seattle, where he now lives, in 1971. When the last folk club closed he took the whole city to be his stage. In 1974, after being threatened with arrest for singing on the street without a permit, Jim took on the Seattle city government to overturn the law and to legalize street performing. He sang his testimony to a packed council hearing and the streets were opened by unanimous decision. It was a landmark case and Seattle is now an internationally famous city for buskers of all styles.

In 1975 Jim recorded his first album of original music, a vinyl LP called “A Shot Of The Usual,” released on his own label. Two other albums followed in rapid succession. In 1977 he journeyed to the UK to perform at the Cambridge Folk Festival. The response was instant and overwhelming and he walked away with a feature in the national music press, two booking agents, and a European tour. He was off and running and spent the next 6 years constantly on the road. He recorded two albums for a Swedish label called Nacksving and one for WEA Ireland. It was in Ireland that Christy Moore first heard Jim’s song “Hiroshima Nagasaki Russian Roulette,” and made it a permanent part of his repertoire. When Christy formed the great Irish band The Moving Hearts “Hiroshima” was their first single and a center piece to their shows.

Jim returned to the States in ’83 and began reestablishing himself as a solo artist and as a player in the northwest music scene. In ’85 he recorded an album in Portland, OR, produced by the great Irish musician Mícheál Ó Domhnaill. 1987 saw the creation of the legendary electric band Zero Tolerance, named after George Bush’s draconian anti drug campaign. It was a tight four piece rock band with the focus on the songs. They shared stages with The Dinosaurs and Alice In Chains, made one recording and broke up, as rock bands often do, leading Jim to more experimentation, this time with the internationally famous spoon player Artis the Spoonman, who was himself the subject of a Grammy award winning song by Seattle grunge rockers Soundgarden. It’s a small musical world.

Fast forward to the 21st century and Jim was busy with constant solo performances, plus various ensemble configurations, leading to more albums. Jim was one of the founders of the Pike Market Performers Guild, Seattle’s first buskers union. They organized and ran the first and only Busker Festival to be operated entirely by the buskers themselves. He again petitioned the City Council, this time to create Buskers Week, another Seattle first. In 2005 Jim was invited to Taiwan for the first time, and again the next year. In 2007 Jim was included in an all star cast of the “50 Most Influential Musicians In Seattle History,” a position shared with Jimi Hendrix, Ernestine Anderson, Nirvana, and Bill Frisell.

The 40th anniversary of the legalization of street performing in Seattle was celebrated with the 14th Annual Buskers Festival, Buskers Week, and Buskerpalooza, creating events all over the downtown corridor. Jim was presented with a proclamation from the City Council in recognition of his accomplishments, signed by all council members.

As Utah Phillips said, “Jim Page’s songs get right to the point. He looks at the world clearly and reports what he sees with compassion, humor and a biting sense of irony. And boy! can he sing and play. If you’re ever going to get the message, this is the messenger to get it from.” 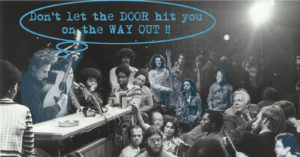 Don’t Let The Door Hit You On The Way Out 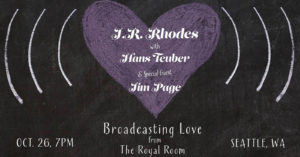