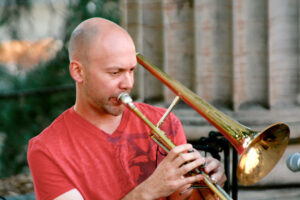 Christian Pincock is a composer, trombonist and educator who creates a wide range of adventurous and eclectic music. Expanding from a firm background in jazz, his work draws upon a multitude of experiences to create unique and innovative music that seeks to explore new concepts and processes.

Christian has three distinct vehicles for his expansive musical vision. He composes for and performs with Slipstitch, which explores unusual orchestrational sounds, brings together composition and improvisation in unique ways, and uses the full textural range of individual solos through complex group counterpoint. Coming out of the jazz tradition of innovation, the group incorporates many other influences including the rhythms of Afro-Cuban and Brazilian music, the forms and compositional practices of European classical music, and grooves and expressive techniques from popular modern styles.

He also performs as Tightrope on trombone and computer using custom controllers and computer software for live control over computer-generated sounds and processing. Some of these controllers include organ-style pedals, buttons and motion sensors attached to his valve trombone and keyboard controllers used in nonstandard ways. Among other things, the music explores the expressive possibilities of indeterminate durations, feel and form within a set harmonic framework.

Christian is also Artistic Director and Conductor of Scrambler, a group of artists who use physical signs based on Walter Thompson’s Soundpainting sign language to convey ideas in real-time in performance. Scrambler’s shows often mix together well-known melodies around a common theme, creating a widely-relatable collage with unexpected juxtapositions of sounds and ideas. The structure of Scrambler makes it a unique social experiment which invites spectators to reconsider the traditional roles of performer and conductor and points to the potential of reevaluating social processes and power structures in our communities at large.

As a sideman/collaborator Christian has performed with a diversity of artists such as Bob Brookmeyer, Wayne Horvitz, Ikue Mori, Bobby Shew, Toshiko Akiyoshi, Darcy James Argue’s Secret Society and many others. Christian has released five recordings under his own name and has performed on other artists’ recordings.

Focused deeply on education as well, Christian has taught and directed bands at Cornish College for the Arts, the University of New Mexico, the New Mexico Jazz Workshop and public school systems in Boston, New York, Albuquerque and Seattle. He has led workshops on composition, electronic music, ensemble playing and improvisation at schools, arts organizations and festivals including University of Colorado Colorado Springs; University of California San Diego; the Santa Fe Complex; The Improvising Composer; and the International Society for improvising Musicians.

Christian holds a bachelor of music degree from New England Conservatory of Music where he studied with Bob Brookmeyer and John McNeil and a Master of Music degree from Manhattan School of Music in jazz studies where he studied with Steve Turre and David Taylor. His continuing education experiences include the Music OMI residency (2007) and The Banff Center Workshop for Jazz and Creative Music (2005). 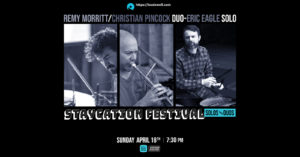