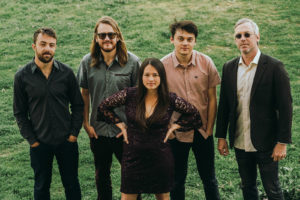 AJ Lee and Blue Summit, a bluegrass band led by singer, songwriter, and mandolinist, AJ Lee, has been the darling of the North Bay, California bluegrass scene since their first appearance in Santa Cruz. Drawing from influences such as swing, folk, blues, jazz, country, soul, and rock, their undeniable talent and insatiable passion for bluegrass harks back to traditional classics while remaining uniquely modern. Over the years, Blue Summit’s performed all around the country as well as in the UK, Ireland, and France. They’ve accrued many devout followers and distinctions including the Freshgrass 2019 Band Contest Winner, IBMA 2019 Momentum Vocalist of the Year, 2nd Place at the 2019 Winfield Guitar Competition, and numerous awards in Northern California. In 2019, AJ Lee and Blue Summit came out with their debut album, “Like I Used To,” which consists entirely of AJ’s original songs. Equipped with these new songs and their archive of nostalgic tunes, they’ll continue playing to both familiar and new audiences, endearing themselves to the country and the world.

“Could This Kid Be the Next Allison Krauss?” Mother Jones magazine asked about AJ Lee — and for good reason. She has won the Northern California Bluegrass Society’s (NCBS) Best Female Vocalist award nine times – and she’s only twenty-one! Popular Webzine Californiality called AJ “California’s Hottest Singer” because of her jaw-droppingly beautiful voice. AJ began singing and performing on stage at the astonishing age of five. By twelve, she began writing her own songs and showcasing them nation-wide. She has traveled with many bands, including “The Tuttles with AJ Lee,” which was featured at numerous festivals across the U.S. and beyond. She is a fantastic mandolinist and songwriter with a gorgeous voice. Ms. Lee is excited to share Blue Summit’s latest album consisting of all original material.

Jesse Fichman started playing guitar at the age of ten when he and his friends decided to form a bluegrass band. Since then, he has played in multiple bluegrass bands, multiple jazz combos, and a country band. When Jesse lends his rich voice to old, classic country songs audiences burst into applause. Jesse graduated from UC Santa Cruz with a degree in biology, and took a majority of the music classes offered there. He is a full time and original member of Blue Summit, and is studying and writing music on the side.

Sullivan Tuttle began playing guitar at age seven, learning quickly from his music teacher father, Jack Tuttle, with nightly home lessons and practice in the family band, the award-winning Tuttles with AJ Lee. By age ten Sullivan started to have an international following with a YouTube video of El Cumbanchero, which he played with his brother and sister (Michael and Molly Tuttle) – their video now has over 1.7 million views. Sullivan has developed a reputation for his rich, deep singing voice and astonishingly skillful guitar solos.

Chad Bowen was born and raised in Northwest Ohio and has been with Blue Summit since May 2018. A hardworking musician, Chad has been playing bass with numerous bands in the Bay area for almost 10 years. Music has always been a huge part of his life. Growing up he played piano, guitar, and sang in choirs. Eventually he gravitated to the double bass where he finds himself today smiling big, holding down the low end, singing sweet harmonies and sometimes singing lead on popular Grateful Dead tunes. 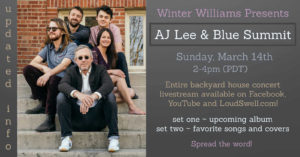