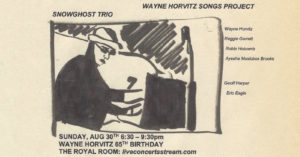 August 30th is the second of two online parties for Wayne Horvitz’ 65th Birthday. Tonight features The Snowghost Trio, whose debut album was released in 2018, and a brand new collaboration entitled the Wayne Horvitz Songs Project. On both evenings Wayne gathers with friends and collaborators both old and new to celebrate over 40 years of music making. Please join us!

The Wayne Horvitz Songs Project will feature different artists who Horvitz has worked with in long term collaborations including Robin Holcomb his wife of 40 years, to much newer collaborators including singer Ayesha Musicbox Brooks.