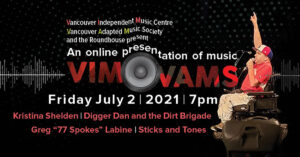 An online concert and panel on the accessibility of music venues, 7 pm, Friday, July 2, 2021

Digger Dan, a solo artist from Surrey, writes, sings, and plays original electric and acoustic guitar music. Pulling inspiration from blues, rock, funk and Latin music, Dan’s sounds are paired with thought-provoking lyrics that touch on personal, local and global instability. His frequent outdoor performances have cemented his place in the Vancouver music community, each time proving to everyone that his disability doesn’t get in the way of his passion. Having picked up the guitar at the age of 20, his love for music remained unchanged after his injury 7 years later. With the help of VAMS, he is recording an upcoming album “10 Feet Tall”, featuring his band, The Dirt Brigade.

Greg ’77 Spokes’ Labine is a rapper who has written and performed spiritually driven hip hop for 20 years. He performs in venues throughout Greater Vancouver including shows with VAMS and has recorded more than five albums. Each performance is a genuine taste of the life of an artist who has overcome many struggles, and a celebration of faith and love through song.

Sticks & Tones is the instrumental duo of Dave Symington and Jim Meyer. First meeting at one of Jim’s busking sessions on Granville Island, they soon learned to combine their talents and create spacious and captivating songs that make you wonder, ‘How are there only two members?’ The “Stick” is a two-handed tapping instrument, which allows Jim to play melody and bass parts while Dave explores percussive and melodic elements with two Roland Octapads. Symington has had a disability (C5-6 quadriplegic) since a diving accident in 1975. He co-founded the Vancouver Adapted Music Society with Sam Sullivan in 1988.

Since 1988, The Vancouver Adapted Music Society (VAMS) has made music accessible for people living with physical disabilities. The idea is simple: everyone should be able to enjoy the benefits of music. Through the adaptation of musical instruments, a fully accessible music studio at the GF Strong Rehab Centre, regular concerts throughout the year and, recently, a mobile studio that can bring VAMS programs to clients, VAMS offers musicians with disabilities opportunities to write, record, and perform their own original music while helping to build social connections.

The Vancouver Independent Music Centre Society (VIM) was created in 2011 to develop a new, acoustically designed space for music, in response to the serious loss and lack of dedicated music venues.
As a non-profit, innovative, purpose-built and supportive music centre, the VIM will offer a stable, professional, accessible, inclusive and welcoming home for music and music-related activities. As such, it will address disabling social, cultural, and political conditions that limit participation in the cultural sector. The VIM is conducting research to develop and plan the music centre to be accessible and inclusive by design, programming and operations. The VIM will develop a comprehensive plan that not only upholds existing accessibility standards but moves beyond the minimum requirements.