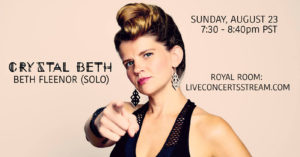 Join us Sunday for our recurring series titled ‘Staycation Festival’, a summer-long series of streaming events at the Royal Room, co-hosted by Live Concerts Stream. Performers are live on The Royal Room stage and follow all Washington State Department of Health guidelines.

Crystal Beth unleashed her first full-length solo studio record in October 2019. The record PUSH THRU uses wailing vocals, amplified clarinet, beat-boxing and electronics to weave a sonic universe all her own. She has been described as “world music from an imaginary planet..quite compelling & magical” (Seattle Times), ”a supremely versatile and virtuosic maverick” (The Stranger), and “one of the most fearless and innovative musicians in Seattle…” (Earshot Jazz). Known for crafting aural rituals that encompass industrial chants, alien disco breaks, heart gushings, and robot love songs, Crystal Beth redefines the possibilities of the voice and clarinet in tight experimental pop songs and undulating, cathartic noise cries. Crafting moments that ricochet between meditation and a full body purge, she is an electric, adrenaline inducing performer voted Seattle’s Best Classical Musician and nominated for NW Vocalist of the Year. Under her full name, Beth Fleenor, she has been featured in performance and on recordings with polymaths including Wayne Horvitz, Jherek Bischoff, and Julie Slick, among a long list of other awesome humans like David Byrne, Terry Riley, Trey Gunn, and Kultur Shock. PUSH THRU is now available through 7d Media