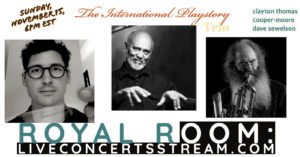 The International Playstory Trio is three minds telling stories with music, some true, some almost true, where the middle is the end and the beginning never ends. The past can be the future, but it all unfolds in the present moment. The group will be playing live from their homes in Australia and NYC.

As a composer, performer, instrument builder/designer, storyteller, teacher, mentor, and organizer, Cooper-Moore has been a major, if somewhat behind-the-scenes, catalyst in the world of creative music for over 40 years.
Clayton Thomas is double bass player and founder of the NOW now, Splinter and Splitter Orchestra. (he once attempted the world’s longest bass solo.)

Dave Sewelson was born in Oakland, California, in 1952. There was a half-size violin kept in the closet in case he wanted to be a concert violinist. He played trumpet at the age of nine, moving to baritone horn at the age of eleven, followed by a stint on drums until settling on electric bass at thirteen, adding upright bass to the mix until the switch to saxophone at the age of twenty-one. He has specialized in the baritone saxophone since the early seventies.