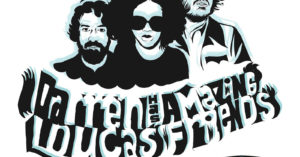 Darren Loucas is a guitarist, singer and songwriter based in the Pacific Northwest. His music is a cocktail of rock, pop and blues- full of those genre’s sweetest strains. He has performed with such artists as Wayne Horvitz, Robin Holcomb and Bill Frisell among others. Join us tonight to hear him unite with his band of longtime collaborators and friends at The Royal Room.

“His guitar playing is a revelation” – The Stranger