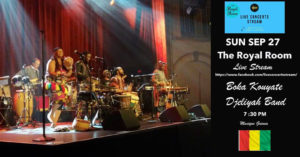 The Djeliyah Band is the newest West African Music & Dance Band that’s located in Seattle, Washington. A harmonic fusion between the traditional Djeli music and the modern Guinea music within West Africa, which provides a highlife sound for your dancing pleasure!

Orchestrated by; multi-talented Djeli, Aboubacar “Boka” Kouyaté of Kankan, Guinea, West Africa. Djeli’s have always been next to the king and honored within the West African region as the Traditional Griot.

The band began February 2015 in Seattle, Washington. Hitting the ground with an exciting bouquet of songs, music and dance that includes an inter-active component for everyone’s enjoyment.