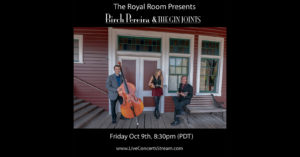 Birch Pereira & the Gin Joints are a 5-piece band based in the Pacific Northwest. Their music is rooted in mid 20th century American music, a complex derivative of blues and jazz as well as soul, rock and roll and Americana. Their front man, Birch Pereira bears a deep tenor voice and in both 2017 and 2018, was nominated “Vocalist of the Year” by Earshot Jazz Festival. Through captivating arrangements, originals and carefully chosen covers, Birch Pereira & the Gin Joints’ deep love of American song traditions is never in doubt.

“A group pulsing with rockabilly, the exploratory sensibilities of jazz, and tender lyricism of country-folk, Birch Pereira and the Gin Joints offer a little something every listener. Pereira thrives in the space between styles, mixing and blending the country, folk, and rock ‘n’ roll music he was raised on with the jazz music he studied at University of Washington as a young adult.” – Alexa Peters – The Seattle Times