The Beatles Let It Be: Presented by Mrs. Phelps 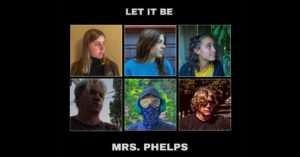 The Royal Room Staycation Fest – The Beatles Let It Be: Presented by Mrs. Phelps

Mrs. Phelps is a roots and soul leaning group of young local musicians. The band is built around two cousins, Claire and Kate Molloy who have been playing professionally since they were in the 4th and 5th grades respectively. Now as 9th and 10th graders they are relative veterans of the local scene. Joining them on guitar is Doug Schoolcraft, Bill Molloy on bass, Erika Monda on guitar and Eric Eagle on drums playing the Beatles classic “Let it Be” (released May 8th, 1970’s) on its 50th birthday.