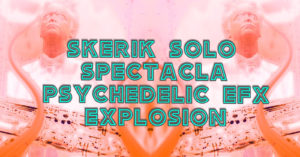 Forever defying categories & notions of the standard human work ethic, Skerik has been brewing worldwide jazz/rock/funk/electronic/avant-saxophonic mayhem since his emergence from Seattle in the late 1980s, carving out an enormous & stupefyingly diverse body of work that remains in restless development (day by day, hour by hour, second by second). A saxophonist by trade & border-destroyer by nature, absorbing anything that carries the whiff of inspiration & sincerity, ensuring that all aspects of his output reflect that same good faith. It is the Skerik way, and it has served him (and us) well.

All totaled, Skerik Skerik has contributed to more than 200 records as a saxophonist and/or keyboardist. His music has seen worldwide placement in feature films, independent films, TV shows, theater & dance pieces. He continues to make Seattle his primary home (now owning & operating his own studio in the city), and he continues to regularly tour around the world with his ever-expanding cast of collaborators & new things to do.