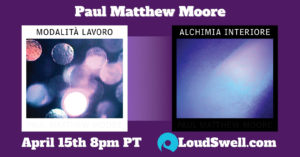 Composer and performer Paul Matthew Moore’s music has been hailed for its “paradoxical lush minimalism,” (Chicago Tribune) and described as “comically charged, dynamic…bursting with creativity and energy” (The Seattle Times). Moore has worked with Wayne Horvitz, Eyvind Kang, Timothy Young, Tim Hecker, Randall Dunn, and Kronos Quartet, among others. Paul currently serves as Music Director of the University of Washington Department of Dance and has collaborated extensively with dance and theater. His music can also be heard in film scores such as Police Beat (2005, SIFF), Zoo (2007, Sundance and Cannes), Improvement Club (2013, SIFF and SXSW), and Pow Wow (2016, SIFF). Paul’s recent work can be heard on two dreamy electro-acoustic albums from 2020, Modalità Lavoro and Alchimia Interiore as well as on AlaBalA a new release by Young & Moore.

“This event will be a short one-hour glimpse into my process of improvising with electronic sound, using as little melody as possible and focusing on a slow and continuous evolution of tone colors. This work often involves setting up a stable sonic environment followed by the implementation of discreet disruptions to perpetuate subtle mutations. Each sound in the environment eventually evolves, gradually causing the whole system to shift in its entirety.”