Marina and the Dreamboats say Bon Voyage to a Band Member 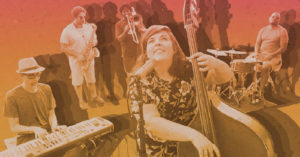 Marina and the Dreamboats

After being diagnosed with a tumor that threatens her right arm, Marina Christopher felt a fire to further launch her dream project. Writing and recording in between surgeries and radiation therapy resulted in ‘Marina and the Dreamboats’, a sassy and soulful band performing songs with depth, humor and pure joy. ‘Marina and the Dreamboats’ deliver an addictive blend of jazz, soul, and classic pop and aren’t afraid to throw in a New Orleans second line here and there for good measure. Marina and the Dreamboats have been sailing the seas of fun since 2015, and during this performance, they say goodbye to one special band member – watch to find out who!

“When I listen to Marina Christopher’s music I’m reminded of Joni Mitchell’s pop-jazz fusion and other songwriters of the era like Billy Joel or Randy Newman. Songs are difficult to write, good songs doubly so.” – Abe Beeson, KNKX