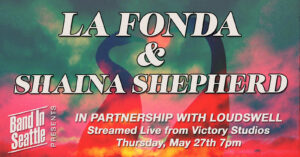 Back in spring 2015, sisters Valerie and Veronica moved in together after both leaving toxic relationships and having spent five years apart while living on opposite sides of the state. The two bonded over music and healing and soon began writing their own songs. After busking at Pike Place Market and playing as a duo around town, the sisters sought to assemble a band. Little did they know they would soon meet who would become their musical soulmates and best friends; the brothers they never had. It wouldn’t be long before a whirlwind of late nights jamming would lead the six-piece entourage to playing packed venues, major festivals and touring up and down the west coast. Their debut album, released in February of this year, New Self Old Ways captures those days of their becoming and was written and recorded in the midst of adventuring together, and from seeing dreams in the faces of your best friends.