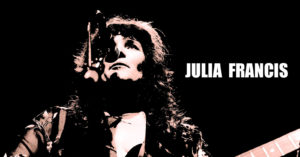 Julia Francis is a Seattle-based singer-songwriter. Her music is deeply rooted in the blues legacies of women like Gertrude “Ma” Rainey and Billie Holiday among others. KBCS describes her voice as “howling, blistering…like Bessie Smith and Sister Rosetta Tharpe colliding with Slick, Joplin and Tedeschi.”

Francis sees her voice as a powerful tool for healing and uniting people, making her performance a moving and uplifting one so you better hold on.
“Francis’s style of singing, which is deliberate, dynamic, and brandishing a slightly jagged edge similar to the 1970s icon Janis Joplin, feels apt, given the very 1970s free thinking mindset of the song itself.”–American Songwriter Magazine