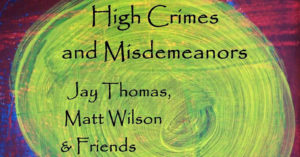 Join us for our recurring series titled ‘Staycation Festival’, a summer-long series of streaming events at the Royal Room, co-hosted by Live Concerts Stream.

Jazz trumpet player and multi-instrumentalist Jay Thomas has been a major part of the Seattle jazz scene for the past 5 decades, appearing on recordings with such people as James Moody and Cedar Walton. This show marks the release of his most recent record, High Crimes and Misdemeanors, an album he recorded last summer with a group of long-time collaborators and friends including drummer Matt Wilson, guitarist Milo Peterson and bassist Chuck Deardorf among others. The album features lesser known pieces by Duke Ellington, Thelonious Monk and Duke Pearson as well as Jay’s own compositions and contrafacts. Writing on the process Jay mentions “My goal was just…fun; making sounds together, without a lot of pre-planning. Our preparation was the many times we have played together and our collective lives in music.” Join us for the release of some funky, irreverent, groove oriented music inspired by a lifelong immersion and collective love of music.