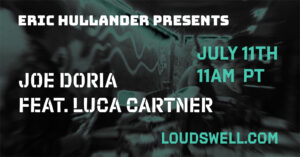 Seattle bassist and composer Eric Hullander plays live music with various artists from the Seattle music scene and discusses life on and off the band stand.

NW raised Joe Doria has been composing and performing on Hammond Organ, piano, and varied vintage keys/synths since the 90’s. Steeped in Hammond tradition studying the giants of the instrument he also never limits himself to one style and can be seen working with new projects often. Featured in numerous bands and CD’s, Audiences are dazed with his ability to comp both the bass lines and the chordal structure of a song, while at the same time adding depth and dimension to every song he performs. At home and in touch with the Hammond, knowing the instrument and it’s history so well as to make it sing in any situation