Debbie Miller on Band in Seattle 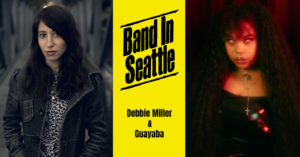 Debbie Miller performs live during a taping of Band in Seattle

If one were to cross Sarah Silverman with Joni Mitchell, you might get Seattle songwriter Debbie Miller. Miller’s ability to walk the line between seriousness, humor, and honesty creates a unique live performance. In October 2018, Miller appeared on PBS’s “The Great American Read,” which highlighted her song, “Queen of Hearts.” Following that, the musician released an anticipated 7-inch vinyl called Two Sides. Miller’s songs have also appeared on WNYC’s Freakonomics and the New Yorker Radio Hour. But her dream is to write a Broadway musical, which she absolutely-freaking-will one day.