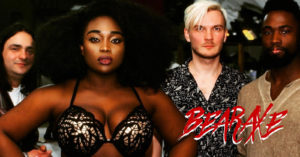 BEARAXE released their debut EP, Last Call, in 2018. The album, recorded by legendary producer Jack Endino, was an Emerald City hit, earning the band spots on Top-10 tastemaker lists and spins on the popular radio station, KEXP. In 2019, BEARAXE performed at Capitol Hill Block Party and at the Showbox Theater on New Year’s Eve. This year, the band played a coveted spot at Timbrrr! Winter Music Fest and opened for Temples.

But the thing about BEARAXE is, if you’ve seen the group live for even a song, they last in your mind like a photo. Each moment, the band is a cloud ready to burst, to unleash sound like weather into the world. And while the music harkens to both classics like Led Zeppelin and Lead Belly, the treatment each of the musicians give their craft is as unique as new warm light on your cheek after the storm.