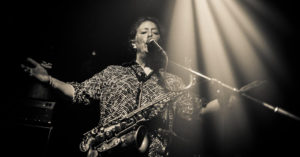 The Amy Denio Experience features four of Seattle’s finest musicians playing scintillating music of the moment. Their unique improvised compositions are influenced by rock, folk and jazz. The group is led by Seattle’s Avant Goddess Amy Denio on accordion, vocals and electronics, along with guitarist and vocalist Steve Enstad, Steve Turnidge on bass, and Greg Reid on drums.

Denio produces music for theater, film, television, and audio installations. Her commissions have been performed at Carnegie Hall, Brooklyn Academy of Music, live on Italian National Radio, and at festivals worldwide.

A composer for modern dance, film and theater, she has been commissioned by award-winning choreographers such as Pat Graney, David Dorfman, Chiao-Ping Li, and Vickie Marks. She has also composed scores for feature films, theater works, multi-media performances, and television. Her newest work for 22-piece orchestra “Truth Is Up For Grabs” was funded by Seattle Mayor’s Office of Arts and Culture and 4Culture and sponsored by the Seattle Composers Alliance.

She co-founded Tone Dogs, The Entropics, her all-women sax quartet The Tiptons (1988-present), joined Bosnian folk metal band Kultur Shock in 1999, and has been playing with Abel Rocha and Madeleine Sosin in Correo Aereo/Ama Trio since 2003. She is currently writing ‘Applause For The Bridge’, a bilingual book of her travel stories in Italian and English.