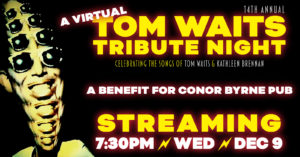 The 14th annual Tom Waits Tribute Night — celebrating the songs of Tom Waits and Kathleen Brennan — is presented virtually this year and will benefit Conor Byrne Pub, the show’s beloved home for the last fourteen years.

In this time of uncertainty for so many in the world, the live music industry has been hit extra hard, especially the small local venues that are the staple in every city, every town. These are where life-long bonds and friendships are formed, where the everyday conversations that lead to extraordinary collaborations happen. Where the ephemeral magic of live music captures your heart. They are the backbone on which this industry is built.

Proceeds from this year’s show will benefit Conor Byrne, a home away from home for so many of us. Please join in supporting this staple in the community, as they have supported all of us over the years.