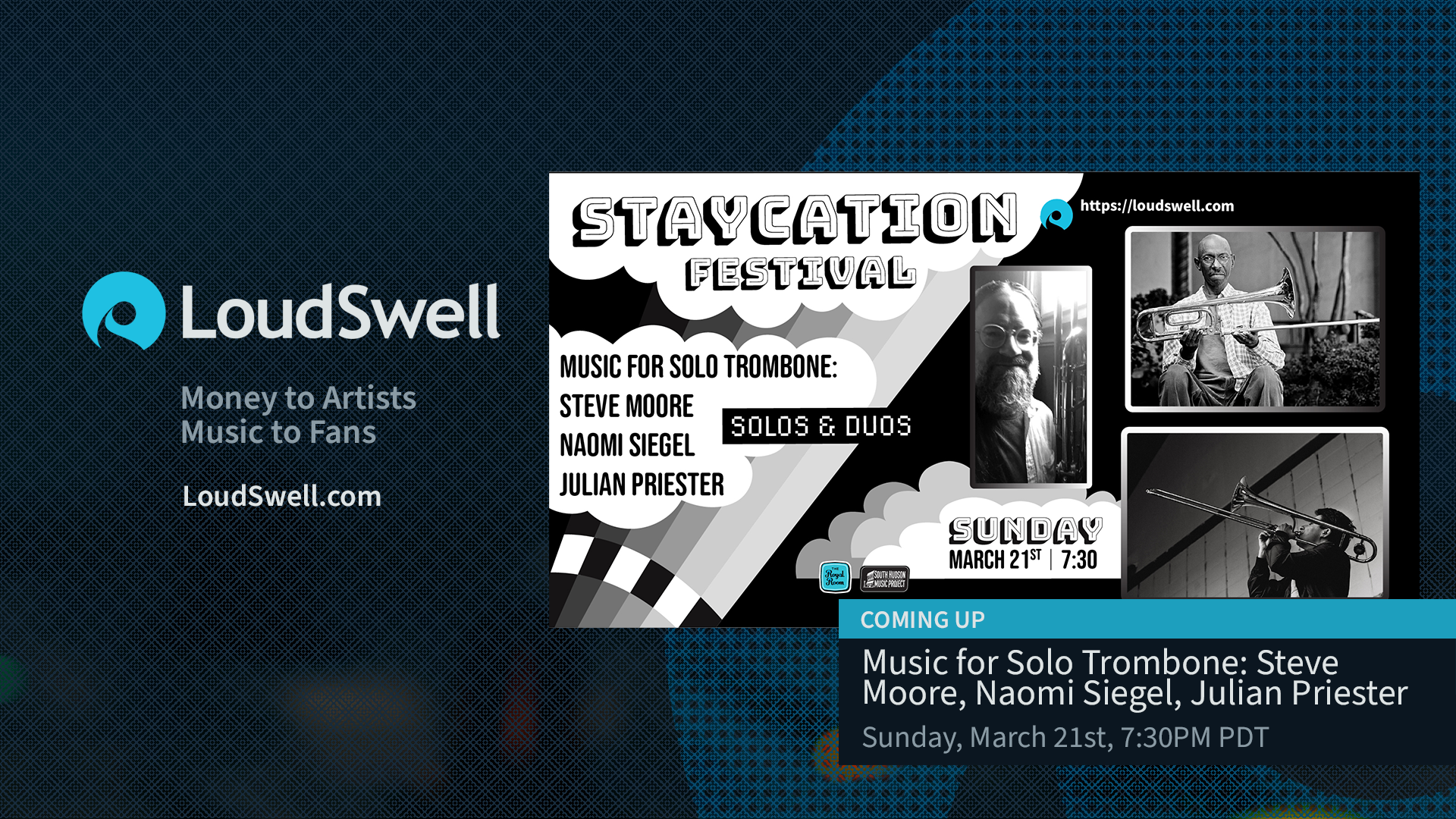 Naomi Moon Siegel is a trombonist, composer, and educator. Improvisation, composition and community are at the heart of Siegel’s musical practice. She is rooted in the Seattle music scene while keeping her home base in Missoula, MT. Her pieces often address themes such as grief, the political climate, the natural world, and family love. A recipient of the Montana Arts Council Artist Innovation Award and Earshot Jazz Golden Ear Award, she has released two albums as a bandleader to critical acclaim.
“Her uncommonly appealing writing has a subtle emotional depth that engages across genres and projects a rich, spacious sound.” – All About Jazz

Steve Moore (aka Stebmo) is a multi-instrumentalist hailing from Seattle, WA. Known as a pianist, with a love for wurlitzers, casiotones and bells, he is also a trombonist and composer. As a studio musician and touring sideman, he has a resume that reads like a cult top-10 list with artists as diverse as songwriter Sufjan Stevens, jazz hero Bill Frisell and black metal pioneers sunnO))). Stebmo has released two solo albums, self-titled ‘STEBMO’ in 2008 and ‘Superdrum’ in 2012, with the companion book ‘Plato, Pythagoras, Polyrhythm’.

Dr. Julian Priester is an internationally acclaimed trombonist. His contributions to jazz and creative music are beyond wide-reaching and his extensive discography attests to this. In his teenage years in his hometown of Chicago, he was a member of Sun Ra’s Arkestra, he played with Muddy Waters and Dinah Washington and thrived off the city’s dynamic blues and R&B scene. He can be heard on such monumental records as Abbey Lincoln’s Abbey is Blue, Max Roach’s Percussion Bitter Suite and Freedom Now Suite, Booker Little’s Out Front and John Coltrane’s Africa/Brass. He has toured with Duke Ellington, Herbie Hancock and Lester Bowie’s New York Organ Ensemble. While Priester has contributed to many different influential records and ensembles as a vital sideman, he has also been an innovative leader of his own groups and has released ECM and Riverside albums since the early 60’s such as Spiritsville, Polarization and Hints on Light and Shadow. Of all his artistic merits, perhaps most inspiring is Priester’s versatility, as he has played in so many different musical contexts through the 1950s until now, from blues to hard bop to R&B to fusion to avant-garde jazz and creative music. Due to the scarcity of sessions Priester recorded under his own name, he remains under-recognized, although he is one of the leading contributors to jazz music and one of the original visionaries. In the late 70’s Priester settled in Seattle and joined the faculty of Cornish College of the Arts, before retiring in 2011. He is a vital contributor to jazz music and beyond, please enjoy hearing his set of solo trombone alongside fellow trombonists Naomi Siegel and Steve Moore.
“Priester is a sleek, avuncular savant who speaks in a hushed, humble tone. His is a very soothing, intimate voice, but it subtly suggests a staunch pride despite years of under-recognition for his remarkable accomplishments.” – The Stranger